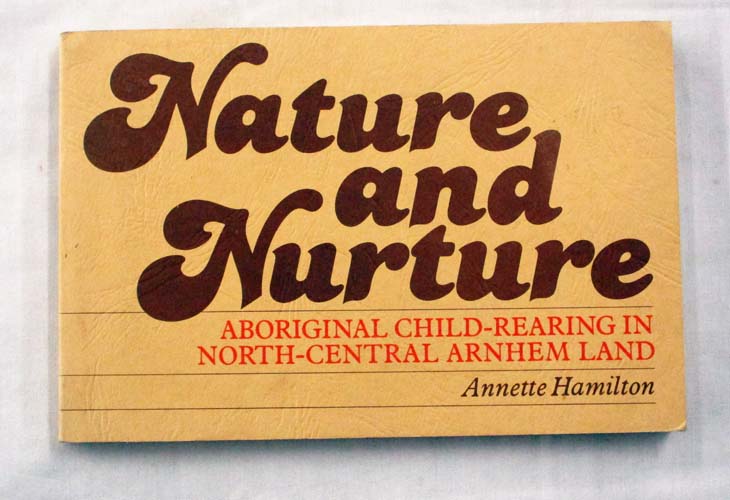 I have written and published many academic works over the years. My first published book Nature and Nurture (1981) was based on research for my Masters thesis in 1967-8.  It has long been out of print although Australian academic and public libraries have copies. A reprint was issued by Humanities Press. It is one of the only books ever written on the way Aboriginal people raised their children traditionally and although it is still widely cited it was never given much credence in the academic world. A book by a woman about child-rearing? What is there to say about that? It was published in a weird format, many referring to it as a kind of “cook book”.

My PhD research in Central Australia never turned into a book. There are many reasons for this, some of which are touched on in my on-going memoirs. My career was deeply affected by the delay in finishing my PhD and even more so by the fact that I never published the requisite book. The thesis is still on restricted access due to the fact that it contains materials about women’s secret ceremonies. However there are several copies in university libraries as well as at AIATSIS in Canberra.

I published over forty papers on indigenous/Aboriginal studies as well as preparing one Land Claim (Lake Amadeus) which substantially failed (after a negative report by an ex-PhD student from my own department). Nevertheless I wrote reports on countless other claims for the Central Land Council and for judges and courts. I was the Consultant Anthropologist on the Royal Commission into British Nuclear Testing in Australia in 1984. This was a traumatic experience for almost everyone involved and although the Aboriginal owners of the Maralinga lands did eventually obtain rights over it, the damage done to the Aboriginal peoples of the desert has in my opinion never been fully acknowledged.

I became completely disillusioned with the relationship between academic anthropology, the legal system and the indigenous world. I felt I could not go on contributing to the developing tragedy of indigenous aspirations as the Australian government and its agents continued to pervert the hopes and dreams behind the legal recognition of Aboriginal land ownership. Aboriginal society was still being undermined by the implementation of Australian power, one emblem of which was the introduction of satellite television across the last of the Aboriginal cultural strongholds in the mid-1980s.

I turned my attention to the impacts of mass media, and this led me to many years of research in Thailand, one of the only nations in the world which had developed its own media systems and did not permit foreign media onto its airwaves. As time passed my interest focussed on mediated forms of popular culture and I began work on Southeast Asian cinema. From the mid-2000s I began research on the little known history of Cambodian cinema. I have published several papers on this subject and a collection of these along with several unpublished essays might appear in 2020.

Almost all of my published papers are available under my name at https://www.academia.edu/ although you do have to sign in.

I am still working on and publishing my Cambodian cinema research. My most recent published paper can be found here:

Fragments in the Archive: The Khmer Rouge Years

Ex-King Norodom Sihanouk and his wife Princess Monique dressed as Khmer Rouge functionaries in a film made by the KR in 1973.

My latest paper soon to be published in a book collection from Edinburgh University Press is about the meaning of stardom in the Golden Age of Cambodian Cinema, the 1960s.

Still from the movie “The Snake King’s Child”, made in the 1960s, starring Dy Saveth. A recent version co-produced with Thai filmmakers remains popular.

This paper will discuss the role of King Norodom Sihanouk as star as well as filmmaker, and his fantasy counterpoint to the destruction of the Kingdom as it became a key element in the war in Vietnam. The publication of this book has taken an awfully long time. Update (November 2019): the editor promises it will be “soon”.

For years now people have encouraged me to write a “proper” academic book on the history of Cambodian cinema, for a reputable press. For a long time, I was almost the only academic writing about the subject, but now there are many new scholars with new things to say, and I am not sure any more whether given my limited time and my likely temporal horizon there is any point in pursuing this idea. Sometimes I want to show “them” that I do have a book in me, in spite of what “they” say. Other times I think, who cares about my book any more. My career is over and academic books exist mainly to support careers.

On the other hand, many people in Cambodia have asked me to publish a collection of my Cambodian cinema papers, which are currently very hard for them to access, along with several unpublished papers already in draft which I have discussed or given talks about at various times, especially at the Bophana Centre. This seems like the perfect opportunity for a self-published “academic” book, since many people now can access an Amazon account, and print copies could be made and sold within Cambodia for a very modest price. So I think that will be my final academic publication project.